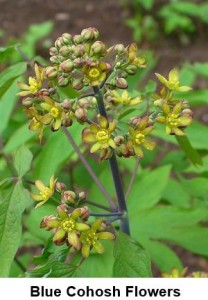 The Short Answer: By coincidence, I received two questions this spring on this plant called Blue Cohosh. There are two very similar species in North America, Caulophyllum thalictroides and Caulophyllum giganteum. Both species can be found in Ontario and in New York. Walter Muma, who runs the excellent site Ontario Wildflowers, identified Sonja’s photo as C. giganteum. He was unable to tell from Alice’s photos which species hers are. The USDA Natural Resources Conservation Resources website shows C. thalictroides in Delaware County, where Alice took her photo, and not C. giganteum, but is almost certainly a result of the fact that C. giganteum was only recently designated as separate species, so many of the reported locations of C. thalictroides are probably C. giganteum or both. There is a third very similar species found in Asia, C. robustus. 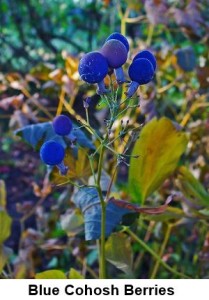 Blue Cohosh grows in forests, and in many locations it is the first wildflower to bloom in the spring. According to Ontario Wildflowers, one way to tell them apart is that C. giganteum flowers are purple/red on the outside and open with, or even before, the leaves. C. thalictroides flowers are more greenish and open after the leaves have unfurled.  But Walter suggests that sometimes, “You just have to walk away accepting that it’s a Blue Cahosh and you’re not sure which species, especially in places where both species occur.”

More Information: Blue Cohosh has brilliant blue berries that are poisonous. As in many cases with poisonous plants, it may also have medicinal uses. Native Americans used it to treat menstrual problems and to induce labor, and attributed other uses as well. Pharmaceutical companies are investigating the plant for possible useful drugs.

Special Thanks to Walter Muma for identification!

Cite this article as: Pelletier, TC. (June 11, 2013). What are these purple shoots? Retrieved from http://askanaturalist.com/what-are-these-purple-shoots/ on July 3, 2020.

One thought on “What are these purple shoots?”