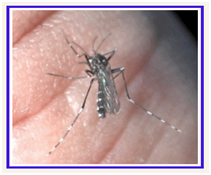 The Not So Short Answer: This sounds like the Asian tiger mosquito (Aedes albopictus), an invasive species that arrived in Texas in the mid 1980s and has spread rapidly across much of the United States since then. It is currently considered to be the most invasive mosquito in the world and is now found on every continent except Antarctica.

You mention black and white on the wings. The black and white of the Asian tiger mosquito is actually on the body and the legs, but the wings are fairly transparent, so that the pattern can be seen through them. They are also relatively small mosquitoes, so unless you get out a magnifying glass and observe one before you smash it, it may be hard to see 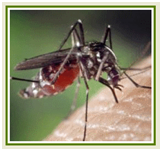 exactly where the black and white pattern is. Look for a diagnostic white line that runs down the middle of the thorax behind the head.

Part of the reason I feel fairly comfortable in suggesting the Asian tiger mosquito is your pest is that Aedes albopictus is famously annoying to people for two reasons – exactly the ones that are driving you nuts. First, they are active and biting during the daytime hours, unlike most mosquitoes that are active at night. So they bite people a lot. And second, in association with people, they are able to thrive during droughts that drastically reduce the populations of other mosquitoes. They can reportedly lay their eggs successfully in as little as an ounce of water, so even in a drought, the Asian tigers seem to keep right on multiplying … and biting.

As for what you can do about them, scientific studies (anyone want to volunteer to be bitten by mosquitoes?) have shown that DEET, picaridin, and PMD all have similar repellent effectiveness, with one or the other being slightly more effective against a particular species of mosquito or in a particular type of application. DEET (N,N-diethyl-m-toluamide), of course, has been in use for decades and can be found in many insect repellents. Picaridin (2-(2-hydroxyethyl)-1-piperidinecarboxylic acid 1-methylpropyl ester) has been in use in other countries (under brand names such as Bayrepel and icaridin) for many years and was originally created to imitate an extract of the Japanese Prickly Ash (Zanthoxylum piperitum). PMD (p-menthane 3,8-diol) is the synthesized version of oil of lemon Eucalyptus (some produces may list the oil itself). There are also products that are essentially oils of one type or another. A simple application of soybean oil to your skin is at least somewhat effective in repelling mosquitoes.

By checking the active ingredients on commercial repellents, you can choose which repellent you want to use. DEET is the most widely used and has the longest track record. However, some people are sensitive to it, it can dissolve some plastic-based fabrics, and there are concerns about its safety in high concentrations (click here for the American Association of Pediatrics recommendations for repellents for children). Picaridin’s main selling point is that it is a non-oily alternative to DEET. Some people assume PMD, the oil of lemon Eucalyptus product, to be safest because it is the closest to being a natural product. But all three are generally considered to be safe when used according to the directions, and in many places, the risk of mosquito-borne disease is probably greater than the risk of toxicity from these repellents. The Asian tiger mosquito has been show to successfully transmit 30 or more disease-causing viruses under laboratory conditions, including West Nile virus and Dengue fever in areas where these diseases are prevalent. Whether it is a serious vector for disease in the United States is an open question.

Here is a link to the U.S. Centers for Disease Control page on repelling mosquitoes: http://www.cdc.gov/ncidod/dvbid/westnile/RepellentUpdates.htm

Other than repellents, I’m not sure there is much you can do. The Asian tiger mosquito is fairly resistant to malathion and other commonly used insecticides. Empty any standing water on your property, even water at the base of flower pots. But unless you’re willing to go door to door dumping all the water in your neighbors’ yards, you probably won’t cut down on the population of mosquitoes much. Citronella candles work but probably not much better than any other smoky candle. If you really want to hang out in your backyard, you might try getting a screen tent.

The other thing to try is not breathing. Mosquitoes are attracted to carbon dioxide and will hone in from some distance to the carbon dioxide in your breath. (Black flies do the same thing. Click here to see my article on that subject at CuriousNature.net, a companion website.)

More Information: For those of you who are opposed to globalization, you could add the Asian tiger mosquito to your list of reasons. It’s fairly well established that this little blood sucker was shipped around the world in old tires being sent from one country to another for retreading. Water collected in old tires is well-known to make great nurseries for mosquito larvae of many mosquitoes.

There is a very nice 3-minute video on youtube.com that shows the entire 4-stage life cycle of a typical mosquito from egg to larvae to pupae to adult. http://www.youtube.com/watch?v=wFfO7f8Vr9c&feature=related At the end of the video, the male and female adults also very nicely show that typically male mosquitoes, which don’t bite, have bushy or feathery antennae, while females (the biters) have thin antennae.

The life cycle of our Asian tiger mosquito friends is very similar to the mosquitoes (genus Culex) in this video. The one difference is that the Culex mosquitoes lay their eggs on the water, as do most mosquitoes. The Asian tiger mosquito is odd in that it lays its eggs just out of the water. The eggs then hatch and the larvae drop into the water. After a week to two weeks, they metamorphose into adults and begin looking for you.

Cite this article as: Pelletier, TC. (August 23, 2010). What are these Mosquitoes? Retrieved from http://askanaturalist.com/what-are-these-mosquitoes/ on July 3, 2020.

One thought on “What are these Mosquitoes?”