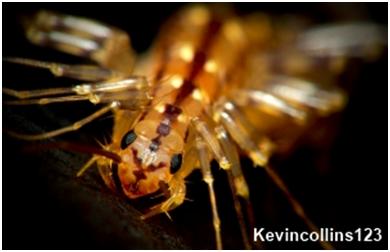 The Short Answer: Wait! Before you get out the centipede-squashing shoe, you might want to consider the possible connection between these startling, but harmless, arthropods (insects, crustaceans, centipedes, spiders and the like) and your house’s relative lack of other crawling critters. In fact, you might want to thank your new friends.

Some experts believe the common house centipede (Scutigera coleoptrata) originated in the Mediterranean, but wherever it came from, it’s now found on every continent except Antarctica. You can find them under logs and leaves in temperate habitats, wherever it’s damp enough, but if you really want to find some Scutigera coleoptrata quickly, your best bet is people’s homes and basements.

There’s no doubt that these guys tend to trigger a startle reflex, in part because they are so fast. They are considered to be one of the speediest arthropod runners. They are also efficient and voracious hunters. They’ve been observed to hold one prey item in some of their many legs while catching another. And they hunt and eat all those other buggy-type critters that we don’t like in our houses: cockroaches, ants, silverfish, pillbugs, spiders … even other centipedes. And yes, you’ve heard that centipedes have a venomous bite, and that’s true. The toxins of many tropical centipedes can be quite painful. The house centipede’s toxin is relatively harmless, however, and it rarely bites, in part because it isn’t strong enough to break human skin easily. If you are one of the rare people to get bitten by one of these guys, it might register somewhere between a mosquito bite and a bee sting – nothing to have nightmares over.

So tell your husband that if he’s afraid of insects, he should welcome centipedes. They aren’t insects, for one thing, and in fact, they give insects nightmares. So tell him that when he sees them whisking their way across your walls or ceilings, he should just proudly say, “There go my little exterminators. Those Scutigera are the greatest, and they work for nothing!”

Other Interesting facts: Adult house centipedes have 15 pairs of legs (more on that later), but if you look closely, you’ll notice that the last pair is generally held up in the air. People who study these 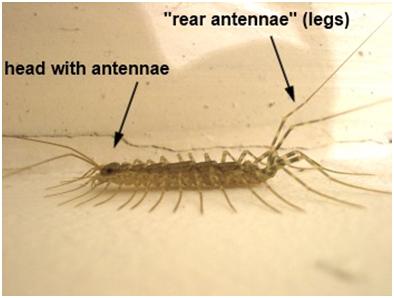 centipedes believe those legs serve as rear antennae – sort of like back-up lights on a car.

Actually, there is one other pair of legs, but you wouldn’t be likely to count them. Turns out that the venomous pinchers at the head are actually the first set of legs, modified to grasp prey and inject a mix of toxins. So house spiders have 30 walking legs, plus two pincher-legs.

However, you might see a house centipede with fewer legs, in which case you are looking at a juvenile. House centipedes molt eight times. As with insects and other arthropods that metamorphose, the stages are called “instars.” The first two instars have no mouthparts and therefore don’t eat (or bite). They continue to develop using the food that was stored in the egg from which they hatched. The first instar has four pairs of legs, and subsequent instars have more pairs of legs until reaching the adult number of 15 pairs at instar six.

For more information on house centipedes, check out these sites:

Why would that be?

It might have to do with the way segments form in the developing centipede. It appears that segments are always formed in pairs. As the embryo grows from head to tail, each segment that is added divides into two segments, each with its own pair of legs. Since each segment divides in two, the end result is always an even number of segments. But wait, didn’t I say there’s always an odd
number of pairs of legs? Right. But don’t forget the pair of legs modified into pinchers. If you add in that pair of pincher-legs, you always have an even number of segments that have pairs of walking legs, just as you would expect if each segment forms and then divides.

Unfortunately, there are a couple of holes in this neat explanation. For one, we don’t yet know for sure that the pincher-legs are derived from a segment that divides.  It may follow a different developmental pathway from the other legs. If that’s true, then the simple explanation that dividing segments always leaves an odd number of leg segments seems to fall apart.

Also, as mentioned above, the first instar of Scutigera coleoptrata has four pairs of legs.  Add the pincher legs and you’ve got five leg segments.  How do you end up with five if segments are dividing?  It’s possible that in some instars, development stops before a segment divides, throwing out the general rule. But if that’s the case, you might expect that at least one of the thousands of species of centipedes might end up with an even number of leg segments. So far, none has been found.

We don’t yet know enough about how centipedes – and other arthropods – develop to answer these questions.

Thanks to Dr. Wallace Arthur, who heads up a team working in the relatively new field of evolution of development (“evo-devo”) in the Zoology Department of the Ryan Institute at the National University of Ireland in Galway.

Whatever You Do, Don’t Run

Where Does Trash End Up?

What is this Other Toad/Frog Call?