However, it looks like these guys are all climbing up a line of silk. I say that because the majority of their black heads seem to be pointing up. What’s a little odd about that is trying to figure out how the line got there. The real question here is, “Can one of these caterpillars fly?”

Probably not. There are some caterpillars that jump a little bit when they are startled, but none that can jump 15 feet of so from the ground up into a tree branch. And though all of these guys will be able to fly when they turn into moths, they’re awfully poor fliers at this age, what with not having wings and all. So if it seems unlikely that a caterpillar went up to the branch, we have to assume that instead a caterpillar dropped off the branch to the ground. This happens with some frequency, when caterpillars get blown off a leaf or branch by the wind or knocked off by rain. Once there, they may have a long way back to food, and are vulnerable to all kinds of predators. In fact, one of the benefits of social foraging for caterpillars seems to be that when they all lay down silk paths together, they can hold on better and avoid being knocked down to the ground. 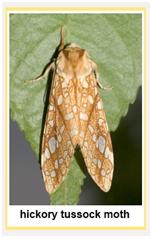 So if the lead caterpillar got blown off, trailing silk as it fell, it’s possible the rest followed it down the silk trail, reinforcing the silk as they went. Then, when they got to the bottom and discovered there was nothing edible there, they started back up. But Dr. Terry Fitzgerald, of the State University of New York at Cortland, who is one of the world’s foremost authorities on social behavior in caterpillars, thinks this is unlikely. He has a different speculation.

“This is clearly a distressed situation with the caterpillars attempting to work their way up the strand to get back to the branch. For social caterpillars, spinning down is typically a last resort since this could result in their permanent separation from the colony.  The caterpillars may have had a composite silk pathway laid along the length of a branch and were walking along it when somehow the pathway was separated from the branch and the caterpillars along with it.   It is not difficult to do this if the stand is grasped and pulled from the substrate… the silk is remarkably strong.   If, alternatively,  the caterpillars were harassed and attempted to escape by spinning down,  there would be many, separated down-stands with individuals at the ends of them.   However, it might be that  the caterpillars were tightly aggregated when they were harassed so that their multiple down-strands spun in close proximity to each other, became entangled as the agitated caterpillars jostled about each other in trying to regain the tree. A bird, a person, a strong wind? It’s not possible to say from this single frame what might have caused them to fall en masse from the tree”

According to Dr. Fitzgerald, this is not typical hickory tussock moth behavior. So the bottom line is that you stumbled onto a good mystery and one I’m not sure we can solve. It may have been a fluke. But let me know if you see this again the next time you go to Martha’s Vineyard.

More Information: When we think of social behavior in insects, what usually comes to mind are ants, bees, and termites, but there are many moths and butterflies that exhibit social behavior like this, where the larvae (caterpillars) live as groups and behave collectively. There are benefits and costs to such behavior. Some of the benefits are thermoregulation (see below), protection from predators, and greater efficiency of foraging. Costs include competition for food and the potential for contagious disease.

Thermoregulation refers to the fact that caterpillars warm themselves in the sun, and by feeding next to each other, they can protect each other from the wind and insulate each other so that they don’t lose their sun-gained heat so quickly. And in terms of protection from predators, some social caterpillars are known to respond to wasps and other predators by all standing up and waving their front halves all at once so that they collectively have each others’ backs.

In terms of foraging, the caterpillars want to eat the best food, while expending the least energy, so they can grow rapidly and prepare to metamorphose into reproductive adult moths. Towards that end, there are three types of social foragers among caterpillars:

Warning: Do Not Eat: In my research on Lophocampa caryae I came across medical papers describing the fact that these caterpillars, like many others, have barbed defensive spines that are very difficult to remove. The hickory tussock moth caterpillar seems to be one of the most common culprits. One study described 365 exposures over the course of two summers at the Pittsburg Poison Center. And a doctor described a very unhappy baby who was brought to the emergency room after putting a tussock moth caterpillar in her mouth. The 14-month-old had gotten the fibers stuck over the inside of her mouth and throat. The doctors tried to remove the spines with tape and with forceps one by one and finally gave up because it was taking too long and the baby was under anesthesia. A day later, the baby had stopped fussing and the spines were gone. The author of the paper speculated that because the lining of our mouth and throat is constantly being shed and regrown, that resulted in the spines falling out on their own. But my advice is not to count on that process because the baby was apparently pretty miserable until she shed all those caterpillar spines.

Probably safer to just not put them in your mouth.

My Thanks: Thanks to Dr. Terry Fitzgerald for his gracious and patient help. To learn more about social caterpillars, be sure to go to his site: http://web.cortland.edu/fitzgerald/index.html.

Also, thanks to Mark Mello, Research Director at the Lloyd Center for the Environment in Dartmouth, Massachusetts, and Suzan Bellincampi, Sanctuary Director, Felix Neck Wildlife Refuge, Martha’s Vineyard, Massachusetts, for their additional help in identifying the caterpillars.

Videos: Here’s a video of what also looks to me like a hickory tussock moth caterpillar hanging on a silk thread, twisting in the wind:

Who laid this large stinky egg?