The Short Answer: The butterflies were mating. Here’s a short video clip showing monarch butterflies doing exactly what you describe.

Warning, this one is a little dizzying: http://www.youtube.com/watch?v=Z-kFgUVhK4I

According to Martin Olofsson, who studies butterfly behavior at Stockholm University in Sweden, when two mating butterflies are disturbed while copulating, they may try to fly away together, with one member of the couple as the carrier and the other going along limply as the carried. Interestingly, within a species, it is always the same sex that carries. In one species it’s males, in another it’s the females. 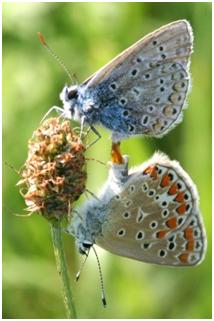 More Information: The data, Olofsson says, suggest that this behavior is about escaping from predators and not about “mate-guarding.” Mate-guarding is a collection of behaviors common in many animals, where males will guard their mate to prevent other males from fertilizing her eggs. In birds, fish and mammals this might involve chasing other males away from a territory. In insects, mate-guarding often involves staying physically attached to a female long enough for sperm to find their way to the female’s eggs, or for the female to stop being receptive.

It’s possible that in some species at least, the butterfly behavior of flying off with a mate may be a male’s attempt to hide the mated female from other males.  Olofsson, points out, however, that females carry the males in some butterflies, so that makes male mate-guarding unlikely as a general explanation for this behavior.  It might, however, be an added benefit, at least in those species where males do the carrying.

Thank you to:  Martin Olofsson for his generous help.

Cite this article as: Pelletier, TC. (July 27, 2011). What are these butterflies doing? Retrieved from http://askanaturalist.com/what-are-these-butterflies-doing/ on January 19, 2020.

23 thoughts on “What are these butterflies doing?”