The Short Answer: Victoria, glad to hear you are enjoying the toads. There are so many tiny toads all over my yard right now that I worry about inadvertently stepping on them. In northeastern Pennsylvania where you live, there are two toad species, the American toad (Anaxyrus americanus – formerly Bufo americanus) and the very similar Fowler’s toad (Anaxyrus fowleri – formerly Bufo fowleri). The easiest way to tell the two species apart is to flip them over and look at their bellies. If it has dark speckles, it’s probably an American toad and if not, it’s probably a Fowler’s toad. 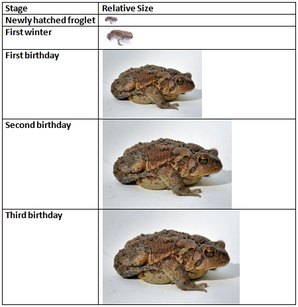 Both species start out as tiny toadlets, about 1 cm (3/8 inch) long. They grow rapidly in the first year and then slow down dramatically. By their second birthday, they are pretty close to full grown. Males generally begin to breed in their second year, females in their third. This chart is based on data for the American toad from Frogs of the U.S. and Canada by C. Kenneth Dodd. The book lists the size range of adult American toads as 5-9 cm (2-3.5 in.). The largest American toad on record was a whopping 15.5 cm (6.1 in.). Fowler’s toads are somewhat smaller at 4.5-8.2 cm (1.7-3.2 in.), with a record size of 9.2 cm (3.6 in.).

If your toadlets are already about an inch (2.5 cm), then they must have been early hatchers this year that have done very well eating small insects around your garden. Toads are pretty voracious insect eaters. One study estimated that an adult American toad could eat nearly 10,000 insects a year!

14 thoughts on “How fast do the tiny toads grow?”