What is this Jelly-like Blob Under My Dock?

The Short Answer: Without any other information or photos, it’s hard to be definitive about this, but usually, when people ask this question, what they have found is colony of the freshwater bryozoan Pectinatella magnifica. Freshwater bryozoans are tiny colonial animals that can form jelly-like masses, which are often found attached to sticks or docks.  Bryozoan colonies can be as much as a foot (30 cm) in diameter.

More Information: Though they are not closely related to corals, bryozoans are superficially similar in that they are tiny colonial aquatic creatures that effectively filter particles from the water. The large gelatinous species is native to North America and often grows on docks and other submerged wood. During the summer it releases small larvae that swim away and establish new colonies nearby. In the fall each colony produces thousands of tiny, seed-like disks that remain dormant over winter and germinate the following spring. Most other freshwater bryozoan species form branching tubules that resemble brown moss in the water (Bryozoa = “moss animal”). While freshwater bryozoans improve water quality, some species become a serious nuisance when they clog intake and irrigation pipes.  For further information on freshwater bryozoans, the site of Dr. Timothy Wood at Wright State is very helpful: http://www.wright.edu/~tim.wood/bryozoans.html. (My thanks to Dr. Wood for his help in preparing this answer.) 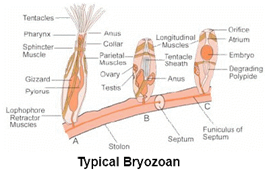 This Youtube video shows a very nice view of a bryozoan filtering food particles out of the water: http://www.youtube.com/watch?v=utPtyceR_YY&feature=related

What is this eel-like ribbon fish?