The Short Answer: Unfortunately, this photograph doesn’t show much detail, so we haven’t given Mandy Howe from www.spiders.us much to go on. But her guess is a female giant house spider (Eratigena atrica, previously known as Tegenaria atrica, T. duellica, T. gigantea, and T. saeva – updated in August, 2014), also known as the greater European house spider. Mandy told me:

“Eratigena atrica is present in Albert.  They are very large when full-grown and can run really fast, but are very docile and not considered dangerously venomous to people. They are a European import and are fairly common in and around homes in some of the Canadian provinces as well as the Pacific Northwest of the U.S.

“This kind of spider uses a web to catch its prey (insects and other spiders), so they depend almost entirely on vibrations rather than their poor eyesight. My guess is that the spider was disturbed from its web or was not finding enough food at its current location, so it moved on… these spiders run along the baseboards in homes (sticking to the outsides of rooms, almost like mice do), so her escaping out the door as the reader 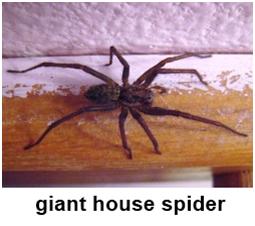 opened it was most likely a coincidence, as the spider was running scared and blind.”

Here’s a better picture of the giant house spider. You can see that it has a very similar shape and posture to your photo.

More Information: The giant house spider is closely related to the more infamous hobo spider (Eratigena agrestis, formerly called Tegenaria agrestis). They and other spiders in the same genus (Eratigena) look very similar. And these spiders certainly are large. A female hobo spider’s body is 11-15 mm (1/2 inch) long. A female giant house spider’s body is 16-18 mm (3/4 inch) long and its leg span can be nearly two inches. Males have smaller bodies, but can have longer legs, with a leg span of nearly three inches! Seeing a spider that big crawling across the floor will get most people’s attention.

Many people think the hobo spider is both aggressive and venomous, and you can find many websites that insist that hobo spiders cause necrotic wounds (wounds that fester and cause tissue death). However, this is all based on a single study that has proven to be unrepeatable. Like the giant house spider and other Eratigena spiders, the hobo spider is highly unlikely to bite and despite its reputation, does not appear to cause serious wounds. A study reported in the Journal of Medical Entomology in 2011 showed that there are no compounds in the bite of a hobo spider that are likely to cause serious wounds. Another theory is that hobo spiders introduce bacteria, but a complete culture of all bacteria found on dozens of hobo spiders showed only common bacteria typically found in the environment. Because there have been rumors that hobo spiders carry MRSA (Methicillin-resistant Staphylococcus aureus), an antibiotic-resistant bacteria that is a public health problem, the researchers exposed hobo spiders to MRSA to see if they picked it up from the environment and could therefore introduce it in a bite, but even after exposure, there was no evidence of MRSA on the hobo spiders.

These spiders, both hobo spiders and giant house spiders, are native to Europe, where they have lived in people’s houses for centuries. They were introduced to North America in the 20th century. Oddly enough, in Europe they don’t have a reputation for being aggressive or dangerous, which suggests that their North American reputation could be a myth.  To see a video of a child letting a giant house spider walk all over her hand, go to http://www.youtube.com/watch?v=xxNpitlKc_s&feature=youtu.be.

People’s fears of spiders are largely unfounded.  Mandy reports that she has handled giant house spiders and many other species for decades without EVER being bitten.  I have picked up and removed hundreds of spiders of all kinds from my house over the years and have never been bitten.  You are far more likely to be bitten by an ant.

So whether the spider in Jojo’s daughter’s house is a giant house spider or a hobo spider, there is little to fear from these spiders. In my opinion, with a baby in the house, I’d be more worried about using pesticides to exterminate spiders than about the spiders.

6 thoughts on “Is this spider venomous?”