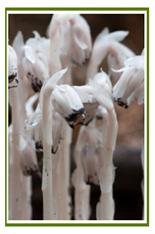 The Short Answer: There are many references on the web that call Indian Pipe (Monotropa uniflora) a “rare plant,” but I don’t believe that’s accurate. It has a very wide range, spanning most of the globe. In fact, one source claims it has a wider range of distribution on the globe than just about any other plant. The seeds are nearly microscopic and can be carried on the wind for long distances. However, Indian Pipe occurrence in any one location can be very spotty, because the plant needs just the right conditions and just the right hosts (fungi and trees). Obviously, in your area, it doesn’t occur very frequently.

More Information: Indian Pipe has a nearly worldwide distribution, but it may not all be one species. Botanists have long known that Indian Pipe varies in form from one place to another. Genetic analysis suggests that the Indian Pipe of North America and South America are genetically distinct from the Indian Pipe of Asia. Some scientists are “splitters” who want to describe any genetically distinct and reproductively isolated populations as separate species. Others are “lumpers” who would rather describe slightly different populations as subspecies or races rather than as separate species. 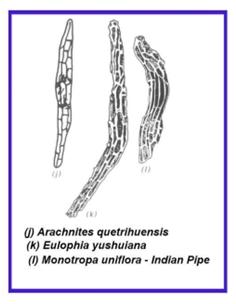 The Interesting Science: Indian Pipe is one of 400 or so species of “myco-heterotrophs.” Myco-heterotrophs are parasitic on fungi that are symbiotic with plants and trees. The fungi provide nutrients to the trees, the trees provide carbohydrates and other nutrients to the fungi … and myco-heterotrophs like Indian Pipe quietly live off the whole process. (See my article on Indian Pipe at CuriousNature.net for more explanation.) What’s interesting is that many of the myco-heterotrophs have evolved in a very similar way, despite the fact that they come from different families of plants. This is called “convergent evolution.” Because the plants are trying to survive in the same way, they may “find” the same solutions to the challenges of survival. For example, most plant seeds contain all the resources a seedling needs to get a good start and begin growing and photosynthesizing. But for a myco-heterotroph like Indian Pipe, that’s not necessary. They don’t need to photosynthesize because they parasitize the fungi and trees. So the seeds of a myco-heterotroph like Indian Pipe can be tiny. At the same time, the plant needs to distribute its seeds very far and wide, since only seeds that end up in just the right spot will find the fungi and conditions they need to survive in their rare lifestyle. So Indian Pipe produces tens of thousands of tiny seeds that can float on the wind and are distributed very far and wide.

The interesting thing is that so many of the other 400 myco-heterotrophs have found the same solution. Most of them produce large numbers of tiny wind-borne seeds. These illustrations of the seeds of three plants from different families are an example. These plants are from the lily family (j), the orchid family (k), and the heath and heather family (l – Indian Pipe). (Illustration adapted from Leake – see below for citation).

11 thoughts on “Is Indian Pipe Rare?”