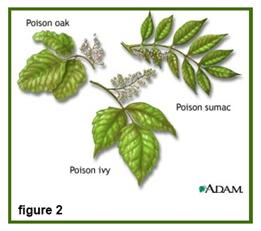 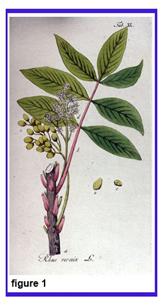 The Short Answer: Poison sumac is a large shrub or small tree found in wet areas. It has compound leaves with 7-13 smooth-edged leaflets, as shown in figure 1. The stalk of the compound leaf is reddish. To differentiate poison sumac from other common sumacs, count the number of leaflets. Staghorn and smooth sumac have more than 13 leaflets, and the leaflets have a serrated edge. Dwarf sumac can have the same number of leaflets as poison 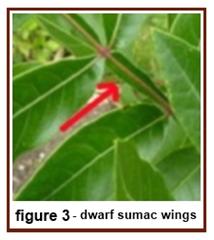 sumac, but the leaf stalk has “wings”, as show in figure 3, in keeping with its alternate name, winged sumac.

More Info: Poison sumac, Toxicodendron vernix, is part of the large Anacardiaceae plant family. The Anacardiaceae includes cashew, mango, pistachio, and the “poisonous” plants so painfully familiar to North Americans. Poison sumac is in the same genus as Eastern poison-ivy, Western poison-ivy, Eastern poison-oak, and Western poison-oak, which means it’s closely related to them. They all produce urushiol, the oil that causes such an agonizing allergic reaction. But the plants are probably not trying to irritate your skin. Most likely they produce urushiol to fend off sap-sucking insects. It’s not clear why people are so susceptible to urushiol. Birds and bears eat the berries of poison sumac, poison-ivy, and poison-oak and expose themselves to the leaves with no sign of harm.

Trivia:
The cashew plant, Anacardium occidentale, also produces urushiol, and cashews have to be handled and processed carefully to separate the cashew nut from the fruit and remove any urushiol from the nut.

Cite this article as: Pelletier, TC. (June 17, 2010). How do you identify Poison Sumac? Retrieved from http://askanaturalist.com/how-do-you-identify-poison-sumac/ on July 3, 2020.

18 thoughts on “How do you identify Poison Sumac?”