Update, A Possible Answer (December 20, 2014):  Charley Eiseman, a naturalist and author (check out Tracks & Sign of Insects and Other Invertebrates), was of enormous help in solving the puzzle of who laid spiral loops of green eggs in lakes in Nova Scotia and Maine.  (Click here to read that post.)  And when he was checking out AskaNaturalist.com, he came across this mystery of the donut blob.  Charley suggested that the source of this blob might be the same as the layer of the spiral loops of green eggs:  caddisflies in the genus Phryganea or Agrypnia.

This is the most likely explanation I have heard yet.

Here’s what I had written previously …

The Short Answer: This one has me stumped. I sent the photo to an expert on amphibian eggs who insisted it wasn’t anything he’d seen before. I sent it to an expert on bryozoans, the “blob under my dock” that is one of the most common questions for AskaNaturalist.com. The answer was negative. I sent it to an expert on freshwater snails, who nixed that possibility. It has been viewed by at least half a dozen biologists who work with fresh water lakes in Maine all the time. None of them could identify it. So you’ve stumped the experts. 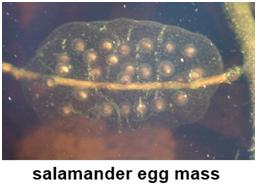 My guess is that it’s some kind of anomaly – a normal object rendered abnormal by strange coincidence. For example, maybe it’s a salamander egg mass that happened to get curled around into a donut shape, and then stayed intact after the eggs hatched and the tadpoles dispersed. Or maybe it’s an Ophrydium blob that formed a donut shape. If you look at the third picture on this page, http://www.bio.umass.edu/biology/conn.river/ophrydiu.html, there is an Ophrydium blob in a roughly similar donut shape. Due to its symbiotic algae, Ophrydium would normally be green, but maybe this one somehow lost its algae so that it appears to be clear. One biologist suggested a shed snake skin that just happened to form a donut shape.

We’re grasping at straws here, maybe. So instead of a good answer, I can only offer two things:

1. If you ever see anything like this in Millinocket Lake again, please take more pictures and send them along and I’ll take another shot at it.

2. If any AskaNaturalist.com reader has an idea about what this is, please add it as a comment to the end of this article. If your suggestion is a good one, I’ll see if I can get an expert confirmation.

Thanks to Pamela and Lori-Ann for the question. Sorry I don’t have a better answer.

Cite this article as: Pelletier, TC. (December 24, 2012). Donut blob that stumped the experts … Retrieved from http://askanaturalist.com/donut-blob-that-stumped-the-experts/ on January 19, 2020.

14 thoughts on “Donut blob that stumped the experts …”