More Information: Most toads will eat almost any animal small enough to fit in their mouths – and sometimes animals too big to fit in their mouths! So earthworms, insects, terrestrial crustaceans, and other invertebrates are all on the menu. One study in Canadian jack pine forests found that American toads were big eaters of ants. But nice juicy earthworms are probably a treat. So the toad you saw chasing an earthworm 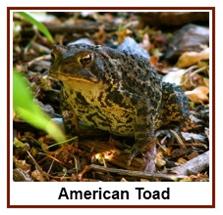 was almost certainly after lunch. There is a Youtube video of a pet American Toad eating a large worm here: YouTube Clip.

Two toad species are common in Connecticut, the American Toad (Anaxyrus americanus – formerly Bufo americanus), and Fowler’s Toad (Anaxyrus fowleri – formerly Bufo folweri). They can look very much alike. The American Toad gets considerably larger, so if you see a four inch (10 cm) toad (with legs tucked in) in Connecticut, that’s almost certainly an American Toad. But if you see one smaller than that, you’ll have to look more closely. The Peabody Museum at Yale University has a nice online guide to the amphibians and reptiles of Connecticut 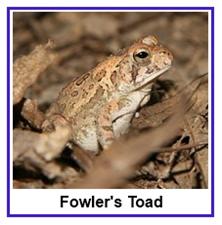 (Yale Peabody Museum). Here are that site’s descriptions of the two Bufo species:

American Toad – A brown or brownish gray toad of 3 to 4 inches (7.6 to 10 cm) in length. The brown spots on the back generally contain 1 or 2 wart-like protuberances. The belly is creamy white with a peppering of dark spots.

Fowler’s Toad – A medium-sized toad reaching 2 to 3 inches (5 to 7.6 cm) in length. Dorsal coloration is brown or brownish gray with brown or black markings surrounding the warty protuberances on the skin. Generally, three or more “warts” occur with each dark spot on the back. The belly is creamy white usually lacking dark speckles.

It sounds to me like the simplest way to tell an American Toad from a Fowler’s Toad would be to tip them over and look for dark spots on the belly. If it’s got spots, it’s probably an American Toad. If not, it’s a Fowler’s. That should work in Connecticut, where these are the only two species that are common. In other parts of the world, you’d have to know the local species. American Toads and Fowler’s Toads both like sandy soils. You’re more likely to find the American Toad in an upland area, and more likely to find a Fowler’s near a stream or other water, but both can be found in the other’s prime habitat, so that’s not a very good way to tell them apart. You can also listen for their songs in the spring to tell what kind predominates in your area. You can hear the songs at the Yale Peabody Museum site. The songs are roughly similar, but the American Toad’s song is prettier. The Fowler’s has a bit of a punk rock edge:

Bufo or Anaxyrus:   As new information becomes available, scientists often revise the taxonomy or classification of animals and plants.  This doesn’t change the organisms, of course, it just changes the way we talk about them.  The toads of North America have been considered to be a part of the large genus Bufo, but were recently reclassified as belonging to their own genus, Anaxyrus.  They are still in the same family, the Bufonidae, which has about 530 species, and is considered by herpetologists to be the “true toads.” However, in common name usage, there are many species of frogs that are also called “toads.” The name/description “toad” is generally given to any frog that lives in a dry habitat. Interestingly, convergent evolution has led to many of these frogs looking very much like bufonid toads, dry, warty skin and all.  [modified July, 2015]

Trivia: A group of toads is called a “knot.”

7 thoughts on “Do Toads Eat Worms?”