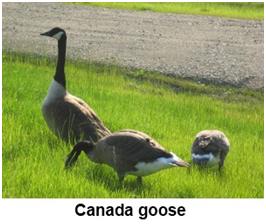 The Short Answer: Canada goose and Cackling Goose (Branta Canadensis & Branta hutchinsii ) chicks fledge (begin flying) as early as 40 days and as late as 73 days, or from 6-10 weeks, depending on the subspecies. The smaller subspecies fledge more quickly. To make things difficult, there are at least a couple subspecies breeding in the San Francisco area, so it would be hard to know which one your family represents. But if they really went from just hatched chicks to almost as big as adults in three weeks, it sounds like it might be a different family. 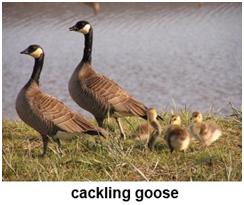 More Information: There were eleven subspecies of Canada goose recognized, split into two groups, which roughly corresponded to the big Canada geese and the small Canada geese. Genetic analysis suggests that these groups have been separated for a million years or so, and the American Ornithological Union decided in 2004 to separate them into two species: the Canada Goose and the Cackling Goose. If you put one of the larger Canada geese next to one of the smaller Cackling geese, it’s easy to tell them apart. The Canada goose is considerably larger and has a longer neck and longer beak. But comparing the smaller Canada geese and larger Cackling geese subspecies can be difficult even for experienced birders. This page from the Sibley Guide to Birds gives lots of information on this challenge:

Cite this article as: Pelletier, TC. (July 8, 2011). Did the Goslings Grow Up That Fast? Retrieved from http://askanaturalist.com/did-the-goslings-grow-up-that-fast/ on July 3, 2020.