The Short Answer: It sounds like you have a feathered polar bear club in your back yard. Maybe they just enjoy the challenge and the shock the same way people who swim in the ocean in winter do.

More likely, they’re washing up. When birds bathe, they often go through ritualized motions that seem to work to get water over most of their feathers, and down to their skin. This probably serves 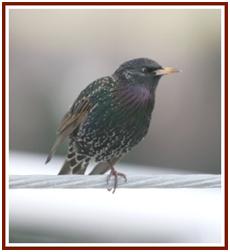 to clean their skin and help remove parasites such as bird lice, and it definitely helps to smooth and repair their feathers. With the temperature just below freezing at 28 degrees F (-2 C), it would take a few minutes for water droplets to freeze, and since the droplets are being heated by the bird’s body, they probably don’t get a chance to freeze and stick the feathers together at that temperature. It might be different at 0 degrees F (-18 C). (Dr. David Swanson, professor of biology at the University of South Dakota, says that he has, in fact, seen ice on birds’ feathers in very cold temperatures.) Bathing seems to be important for most birds to keep their feathers in good shape. This is important to allow the birds to fly well to escape predators. It probably also helps to maintain the insulating properties of the feathers. So the birds may be trading a little short term warmth for more long term warmth and safety. At it turns out, European starlings (Sturnus vulgaris) are particularly good at warming themselves up, so as long as they are well fed, the starlings are probably not in any danger of getting cold from bathing.

More Information: Feathers are amazing adaptations for both flight and insulation, but they don’t come without cost. In fact, one study found that across a wide range of species, birds averaged over 9% of their time preening (1). Some species spend a full quarter of their life cleaning and rearranging their feathers. A bird feather is constructed of a central shaft with lattice-like branches. Coming off the branches are short shafts with rows of barbs which interlock, something like hundreds of tiny zippers. Any time a bird’s feathers are contacted, some of the tiny zippers may shift and come undone. It probably even happens just when the bird is flying. Unless the bird rezips the feather structures several times a day, it would grow more and more ragged and the feathers would become less and less sturdy. Eventually, the bird would find it pretty hard to fly well (2). This could mean the difference between life and death to a bird trying to escape a predator. So those starlings may not be splashing around just for the fun of it.

As for the ability of European starlings to stay warm, measurements of the ability of birds to increase their metabolism when cold show that starlings are better at it than most birds their size (3). Dr. Swanson, who studies adaptations to cold and other environmental extremes, cautions that the relevant data is old and may have been gathered under less accurate standards than modern studies. Also, the data was gathered in the summer, and many cold climate birds go through seasonal changes that increase their ability to ramp up their metabolism in the winter. The difference between starlings and other birds pretty much disappears in the winter. Still, it’s something of a mystery as to why starlings might have a greater ability to increase their metabolism in the summer. Starlings have a very wide summertime range, extending into northern Canada and Alaska in North America, and well above the Arctic Circle in their native range in Europe. So maybe they are adapted to be able to deal with cold temperatures year round.

One of the ways that birds warm up, by the way, is shivering and using the heat given off when muscles contract, a trick that human Polar Bear swimmers also use. But birds like starlings have those marvelous insulating feathers to hold the heat generated by shivering. So when they take a polar bear plunge, they shake off the water and warm right back up again … unlike their human winter bathing counterparts.

Trivia: Although there is a polar bear swim in Barbara’s home state of Rhode Island, the more famous winter ocean swim there is called the Penguin Plunge.

Sources: My thanks to Dr. Swanson for his generous help.

13 thoughts on “Birds Bathing in Winter?”