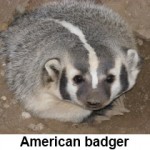 The Short Answer: At first look, I thought fox, too. But Dr. Gilbert Proulx, Director of Science at Alpha Wildlife Research & Management, a wildlife management consulting company in Alberta, Canada, is fairly certain this is a hole made by an American badger (Taxidea taxus), a large member of the weasel family (Mustelidae). He says, “If you look carefully at the sand mounds, on the right side, you will see a linear depression and small ridges which are typical of badger digging activities (although not always present).  Finally, note that a fox den is usually dirty on the outside and one can find prey leftovers.” Dr. Proulx also identifies the scat as being from a badger, and adds “Also, the fact that you have a series of holes in an area is typical of badger hunting activities.”

Dr. David Eldridge, of the University of South Wales, Australia, who has studied how American badger holes affect the water retention qualities of a landscape, agrees that this is probably a badger hole. “These holes look very much like badger diggings. They are not likely to be dens, but are more likely where badgers have excavated burrows used by small mammals. The fact that there are clustered suggests strongly that they are dug for foraging.”

Roland Kays, Ph.D., Director of Biodiversity Lab at the NC Museum of Natural Sciences, also suggests one easy way to be sure: look for tracks in the dirt around the hole. The pawprint of a badger has five toes and that of a fox or other canine (dog, coyote, wolf) has four. You can easily compare tracks here: http://www3.ag.purdue.edu/entm/wildlifehotline/pages/TrackID.aspx. Note also, that the badger has very long claws on its front feet, which often show clearly in its tracks.

More Information: Badgers catch most of their prey underground. They will eat pretty much anything they can kill, but especially small mammals such as ground squirrels, prairie dogs, mice, and voles. They’ll also eat birds, bird eggs, lizards, earthworms and some plant seeds. One of their preferred hunting strategies, at least in winter, is to dig out hibernating rodents. Often, when digging out underground prey, badgers will create multiple holes in their attempts to find their prey.

They also employ a couple of very interesting hunting habits. One is that when hunting animals that live in tunnels with multiple entrances, badgers will sometimes plug all the entrances but one with rocks or dirt or chunks of wood. They will then proceed to rapidly dig down to the trapped resident. This behavior has been added to the growing list of tool use by animals.

The most interesting practice is hunting with coyotes. People often report seeing a coyote chase a ground squirrel and when the squirrel goes underground, a badger takes over, rapidly digging down to the squirrel. If the squirrel tries to escape from a side tunnel, the waiting coyote often catches it. If not, the badger presumably captures the squirrel underground. This seems like cooperation, but it may be more of an opportunistic phenomenon than a true cooperative behavior. There is no sharing of the captured prey, for example. Badgers often eat their prey underground, and coyotes typically walk off with the captured squirrel, leaving a frustrated badger still digging underground. And even when hunting together, the truce between the two species is an uneasy one. Badgers are tough and ferocious, and a single coyote would rarely be successful in killing one, but three coyotes working together have been known to kill badgers, making badgers always wary of their hunting partners.

So it seems likely that coyotes and badgers hunting together is a case of two predators taking advantage of each other’s failures, rather than truly cooperating. A badger follows a coyote, hoping the squirrel escapes underground. The coyote then waits above ground, hoping the squirrel bolts out a side tunnel. Neither hopes for the other’s success, and neither shares any bounty.

What is this wildflower?

What is this Trinity Alps wildflower?

Why do frogs and toads eat their shed skin?