The Short Answer: John, my short answer is “YES!” Snakes are significant predators that keep the population of other animals in check. Snakes are major predators of rodents, for example. We all know how fast mice and rats can multiply when they aren’t held in check. There’s some question as to whether predators help to control populations because of the number of prey animals they eat, or because they restrict the movement and foraging of prey animals. But there’s no doubt that prey with no predators is bad news. Mice that are free to eat and breed all day, without worry, would soon overrun the earth. But when they must constantly be on the lookout for snakes and other predators, they can’t multiply as quickly. So be thankful for predators, including snakes, or someone would have to invent a much better mousetrap.

More Info:
My longer answer to this question is to turn it around. Rather than ask whether snakes are useful to humans, I think the question people really want to know is 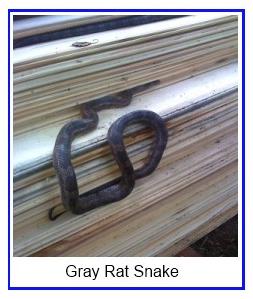 “Are snakes harmful to people?” And the answer is “rarely in North America.” There are very few snakes in North America that will bite without being stepped on, or even more commonly, picked up. For the most parts, snakes are happy enough to get out of your way. You don’t need to “kill them” as John’s FaceBook friends suggest. In fact, one cause of deadly snakebite in the United States is people getting bitten while trying to kill a venomous snake. But even that is pretty rare. Data on deaths caused by animals in the U.S. from 1979-1990(1) shows an average of 60 deaths per year caused by venomous animals. Of those 60, 44 were caused by wasps, bees, and hornets. About 5.5 were caused by venomous snakes, 4 by venomous spiders, and 6.5 by all other venomous animals. So to put things in perspective, you are about 8 times more likely to be killed by bees and hornets than by a poisonous snake. And in comparison to those 60 deaths caused by venomous animals, there were about 97 caused by non venomous animals, including dogs, which account for about 15.5 deaths per year. The largest source of death caused by animals is probably people being thrown, or falling, off horses, with cattle-related accidents next in line. Of course, this doesn’t include more than 100 people killed every year in automobile collisions with white tailed deer.

Another way to look at it is that there are about 6,000 snake bites every year in the United States. There are something like 4.5 million dog bites every year – 750 times as many. So your real worries should be Fido and Bambi, not the rat snake or garter snake – or even the copperhead – by the woodpile.

Having said all that, it wouldn’t hurt to go to this site, at the U.S. Centers for Disease Control, and read their recommendations on how to treat snake bites. The old ideas about applying tourniquets and sucking out the poison are no longer recommended, as they can do more harm than good.

Trivia: There are three states where your risk of being bitten by a venomous snake is really, really low. There are no venomous snakes in Alaska or Hawaii, and few, if any, in Maine (the timber rattlesnake seems to be extinct there). So if you just can’t get past your fear of snakes, those are the places to live.

One other bit of trivia: many people talk about “poisonous snakes.” Technically, that’s not quite right. “Poisonous” means the organism produces a toxin, which is then ingested or absorbed, and “venomous” means the animal actively injects the toxin into the victim. One way to remember that distinction is that Poison Ivy is poisonous. A rattlesnake is venomous.

One thought on “Are Snakes Useful?”